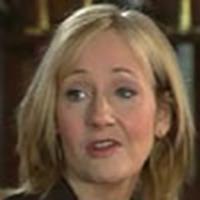 of their interview with Harry Potter author JK Rowling on their site. The show will air three interviews with the author starting on Thursday morning.

In this brief preview Jo says that she was "devastated" after finishing Harry Potter and the Deathly Hallows.

Jo says during the interview:

"It was this amazing cathartic moment," she told Vieira. "The end of 17 years of work. And that was just hard to deal with for about a week. And it’s very much tied into things I’ve done in my life for seven years that brought back a lot of memories of what had been going on in my life when I started writing."

She knows what she has done. "I feel a big sense of achievement," she told Vieira. "I mean, I am sad. But I’ve been sadder."

For about a week after she finished the series, she admitted, "I was hard to live with."

The interview with JK is scheduled to air during Thursday and Friday's airing of the Today Show and on Sunday's Dateline. Please check your local listings for times.

UPDATE: To add to the above story, MSNBC have additional

information from the interiew with JK where she states she will more than likely write an encyclopedia which would include back stories on characters and more:

The encyclopedia would include back stories of characters she has already written but had to cut for the sake of narrative arc ("I've said before that Dean Thomas had a much more interesting history than ever appeared in the books"), as well as details about the characters who survive Deathly Hallows, characters who continue to live on in Rowling’s mind in a clearly defined magical world.

JK offers more about her feelings on writing the last book, this part has spoilers. Thanks to Miriam for the additional article.