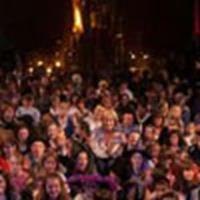 We told you previously that JK Rowling would be participating in a live web event on Saturday 21st, July 2007 at 12.01am (BST) to celebrate the release of Harry Potter and the Deathly Hallows. According to the Bloomsbury site

the on-demand streaming will be available from 02:00 BST Saturday, July 21st.

That would be in about two hours where you can see JK read some of the first chapter of Deathly Hallows.

Meanwhile you can see some pictures from the event here