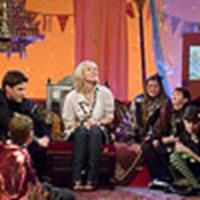 where she answered questions by competition winners and received a honor from the show. Video is now online at the Blue Peter site (you must have real video to watch the videos).

with a gold Blue Peter badge and said:

You have no idea what that means ... thank you very, very much.

also has a brief article on the show.

By the way, she doesn't give anything away about Harry Potter and the Deathly Hallows.