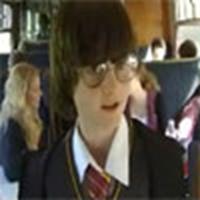 was featured on Scotland's national television network yesterday. The segment included short interviews with guests while aboard the Hogwarts Express carriages and at Edinburgh Castle, as well as comments from a representative of VisitScotland.

Views of the Glenfinnan Viaduct and the beautiful Highlands can also be seen in the video:

to view the 2007 tours, most of which just ended. Next year's tours will be announced later this year!