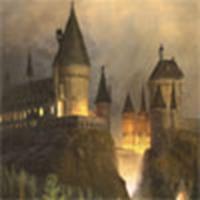 Warner Bros. and Universal Orlando Resort have officially confirmed (finally!) they will be opening an entire "theme park in a park" based on the world of JK Rowling's Harry Potter in 2010, just before the final film is released.

The attraction will include thrill rides, specialized foods, experience-based 'textural' features and more.

) of the live webcast issued exclusively to fan sites tonight which detailed the announcement:

for even larger versions of the artist renderings below.)

There's been a lot of speculation over what we're about to share, but because you folks are the dedicated Harry Potter fans, it was important for us to speak with you first and personally about this exciting news. 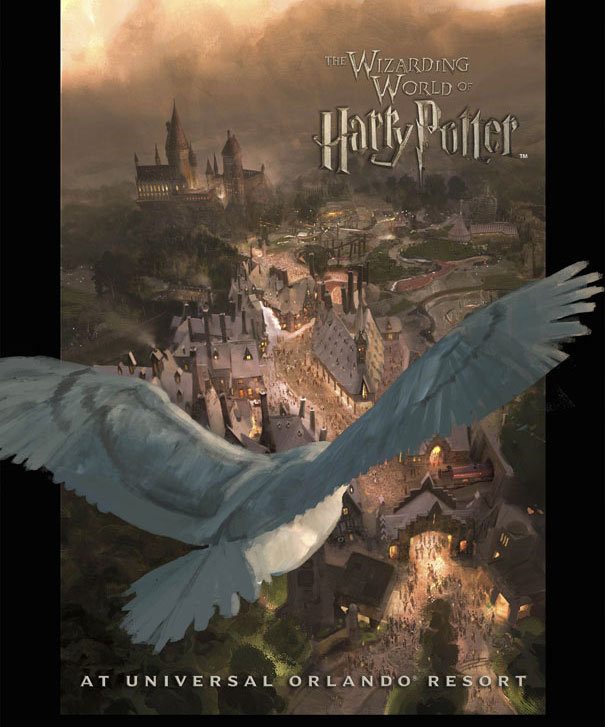 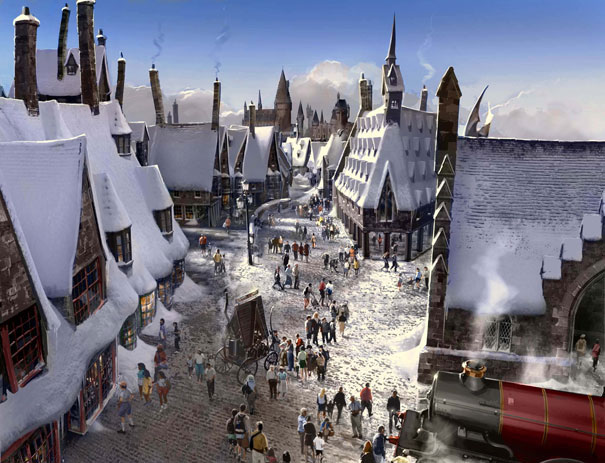 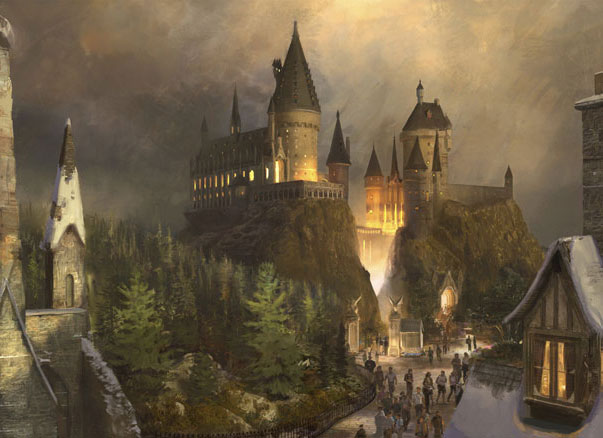 There's a lot happening right now in the world of Harry Potter. The final book is due out this summer, the fifth movie is also coming in July, and we, with our partners at Warner Bros., have been working on a very exciting project of our own. And I'm very excited to tell you folks first that we are adding a new dimension to the world of Harry Potter and bringing it to life in an entirely new way.

Stuart Craig (SC), production designer for all the films, is introduced.

We actually have over 20 artists and designers working here at Leavesden, who've been working on this project with Stuart and his team, to bring that level of authenticity to bear on this project. We've had other help as well. Steve Kloves, who is the screenwriter for many of the films; David Heyman and David Barron, two of the producers, have been a great support in helping us bring this to life in a truly authentic way. And of course, JK Rowling herself has review our plans from the very beginning and has given us her encouragement and support, has been a great collaborator.

Now, this theme park within a park is not just a place. It will be a place to provide an opportunity to experience the magical world of Harry Potter first hand, and offers guests the chance to visit some of the wizarding world's most famous locations. This includes the village of Hogsmeade, the Forbidden Forest, even the crown jewel itself, Hogwarts castle.

Authenticity is something that's very important to us. (To SC:) In terms of both the theme park and just the world of Harry Potter in general, why do you think the authenticity and credibility is so important?

SC: Well, the philosophy on the movies was to make everything seem as real and credible as possible. We undertook a period of research, and looked at the great European cathedrals, Oxford University in this country. We shot in those places, but we also built sets, and we're sitting in Dumbledore's Office right now, which is a reflection of that. So all of this kind of informed us and helped us to keep the world credible, to keep the detail very real and very specific. That same philosophy was applied to the theme park.

What we're talking about here is a fully immersive and engaging environment, with lots of ways to discover this world for yourselves for the first time.

SC: The movie people, this team of 20 artists, illustrators, draftsmen and so on, they know how to deliver the details. Universal's expertise is obviously in generating theme parks and being able to manage the enormous numbers of guests and how to make them safe and how to make them enjoy the whole experience. But more than that, I think there's a particular kind of American skill, American virtue. I think theme parks are American, and I think America has a way of just embracing an idea, really going for it, giving everybody enough and then a little bit more -- 110%. That kind of collaboration and our two sets of very different skills are making this work in a very exciting way.

ST: What we are collaborating on is coming out to be an incredibly exciting project. Now, of course we're talking about the environment, but that's not all that's part of this world. It will be an amazing, immersive, rich and detail filled environment, but there's also going to be amazing rides and attractions, experience-based shows, shops and restaurants, and we'll be bringing out for the first time ever, a spectacular new attraction that will bring the magic and characters and stories of Harry Potter to life in a way never before experienced, capturing the heart and imagination of all of our guests.

SC: I'm scared to death and then I'm enjoying it at the same time. I think even making a movie delivers concerns as well as fulfillment. I'm enjoying our collaboration enormously.

There's a lot of challenges. A lot of times on films, we get caught up in what it looks like, what the camera sees, but less so on what does it feel like, what does it smell like, is it hot, is it cold, those kinds of textural things that we'll be providing in the world that we're building.

ST: Unfortunately we're not quite ready to give out all the details behind the magic yet. We have a long way to go to finish the design on this project, but we'll be providing more information as we go.

SC (on why the story and characters are so powerful): Its reach around the world is phenomenal, and what is really intriguing is that the books and the movies are very very specific in its European culture and British institutions, what we call public schools and what the rest of the world calls private or boarding schools. The manners and the behaviors and so on, very very specifically British. The architectural detail is so geographically specific. So the fact that the world is able to find this accessible and relate to it and get pleasure from reading it is extraordinary, and a tribute to its great great power. The Americanization of world culture, older European cultures often complain about. This is the antithesis of that. This is America embracing a very specific European culture and making it really accessible, taking it to the world. It's enormously powerful, surprisingly so.

ST: We try to give people experiences they can't get anywhere else. This world of Harry Potter will be a place where fans can have a real personal encounter with the magical world. You can discover it on your own, and on your own terms. That's really one of the things that Universal really strives to do.

This park is going to be at Universal Orlando Resort. Our heritage is in the movies and in creating one-of-a-kind experiences. In Orlando, there are actually two Universal theme parks: there's Universal Studios, which is based on film and television, and right next door is Islands of Adventure, which will become the home of The Wizarding World of Harry Potter. At its soul, it's about great stories of literature, great stories of adventure. We feel it's a perfect home for the WWoHP. Islands of Adventure was lucky enough last year to be awarded the Best Theme Park in the World ("applause award").

ST (to SC): What are you looking forward to, when the doors open and you see people coming into the park for the first time? SC: I'm looking forward to being one of them. I want to go there! I want to take my grandchildren. I think this unique collaboration of the theme park world and movie world will be magical and I can't wait to be the first in the gate.

ST: The Magical World of Harry Potter is scheduled to open in early 2010. As I said before, we're going to keep you informed as we move ahead. Visit www.universalorlando.com/harrypotter

for web and e-mail updates.

Q: Will I be able to going inside Hogwarts castle? A: You will, says Stuart. You'll be able to see the exterior of Hogwarts castle and then enter it. It's a magical space, so it's kind of limitless on the insides. But there are certain key elements, very familiar elements, maybe even this environment we're sitting in now, you will indeed be able to go into.

Q: Shouldn't the theme park be in England? A: (SC) I think Orlando is the focus of theme parks. Everybody's very used to gravitating there, and listen, the climate's much better there. It's perfectly natural. I think it's absolutely appropriate. The bottom line is I think you'll do it better there than we'd do it here anyway.

Q: Will the new environment be based on any specific book or film? A: It's intended to encompass the entire world of HP. People are going to be coming to the park at different points in their relationship with the books and the movies, so we want to create a world that feels right no matter where they are in their relationships with the books or films. It's not based on any specific point in time. It's really based more on the DNA of the archetypal Harry Potter book and experience.

Q: Has this been held until after book 7 so that it could be built completely, or is the timing of a coincidence? A: The timing is more coincidence than not. We have been working with Warner Bros. and with JK Rowling for a number of years now, and we've actually already been in design for at least a year and a half. We will be taking elements from all of the books, and eventually all of the films. The WWoHP is expected to open just before the last film opens, so we're going to try to take as much material that represents the world and make it a part of this physical embodiment.

Q: Can fans contribute ideas to the park? A: Yes, we do want this to be a dialogue with you. There will be an opportunity for us to hear back from you. We won't be able to accommodate and incorporate everybody's ideas, but we do want to hear from people.

Q: What steps will be taken to ensure that the park will still feel British even though it is in Florida? A: We are undertaking this project in a way unlike any other project we've taken on before. That includes everything from the way we're building it. We're having it drawn and designed by people with experience not only in Harry Potter but in that British sensibility that Stuart talked about. We're going to continue that thinking all the way through the food that we serve, the merchandise that we sell, the way we train the employees and staff, will all be done with that eye towards authenticity, and an eye towards our commitment to making this world as authentic and incredible and as 'Harry Potter' as it possibly can be.

SC on his favorite planned part: We're sitting in one of them, fortunately, and this is one we'd very much like to create within the theme park. There are corners of the Common Room that I like very much, there are aspects of the Dark Arts classroom I like very much, the silhouette of the entire castle. In Hogsmeade, too, we have never shown the complete Hogsmeade in the movies and there's a chance here to do so. I think those new elements the theme park will have that the movies haven't been able to explore, that's exciting too.

ST: We think that the Harry Potter world is already a classic. It is a modern classic and will have a life well beyond when the seventh book is printed and when the seventh film is in the can. We're making the commitment to building this place where that world will live on for many, many, many years. We look forward to this being a place where you can bring your family, your grandson, your friends, time and time again, and kind of share it with them. Hopefully it will be a place that will appeal to everyone.