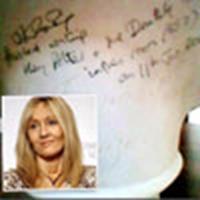 According to a note

on the back of a marble bust at Edinburgh’s Balmoral Hotel which reads "JK Rowling finished writing Harry Potter and the Deathly Hallows in this room (652) on 11th Jan 2007."

According to hotel staff:

We couldn't believe it when we saw it.

We get celebrities in the Balmoral all the time and they often sign autographs for fans - but no one has left one behind on an ornament before.

Thanks to everyone who emailed.

UPDATE: According to a report from the BBC, the hotel has confirmed

that Ms. Rowling did indeed sign the bust but will not say which room she stayed in.

A spokeswoman for the author said:

that the marble bust is being kept under lock and key in a safe place. According to the article from CBBC Newsround, JK is currently in the process of editing the book with the help of "someone from her publishers to see if any small alterations are needed before it's printed." Thanks Ryan.

In yet another story

on this, the hotel states that the statue has been removed and is not Emperor Hadrian as first thought but the Greek god Hermes, the same name as Percy's owl.