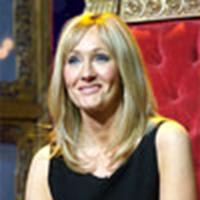 J.K. Rowling, author of the ever popular Harry Potter series, is currently situated

at the number 2 spot on Forbes 'Top-Earning Authors' list. Ms. Rowling, who hasn't published a book in 2006, tallied $75 million last year from book sales, royalties from Potter films and merchandising.

Only a decade ago, the world had not yet heard of J.K. Rowling or her boy wizard Harry Potter. Today Rowling is the world's sole billionaire author. Worldwide sales of her Potter books have topped 300 million copies. Rowling is preparing to close the book on the series with the seventh and as-yet-unnamed installment. Meanwhile the film franchise is one of the strongest in history, grossing a combined $3.5 million in worldwide box office receipts. Harry Potter and the Order of the Phoenix hits theaters this summer.

Editor's Note: Correction to article - the Harry Potter movies are in the number 1

spot of the top-grossing film adaptations ever with $3.5 billion in box office receipts.