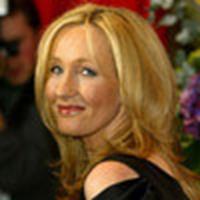 It has taken Robert Watt over 10 months, but a plaque has finally been installed

outside the former cafe where JK Rowling famously wrote part of Harry Potter and the Philosopher’s Stone. Ms. Rowling's plaque joins one for Robert Louis Stevenson, author of Treasure Island and one for poet William McGonagall.

Even though Mr. Watt has never read the Harry Potter books he felt that some recognition was needed

as to where it all began and approached Ms. Rowling, the council, as well as the owners last year with the idea of trying to create a writer's corner in the city.

The plaque, with a photo of the author simple states:

JK Rowling wrote some of the early chapters of Harry Potter in the rooms on the first floor of this building.