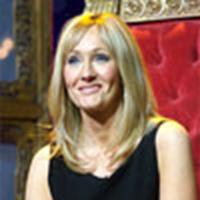 Harry Potter author has been named one of the 20 people who have done most to inspire children. JKR was selected for her "unique contribution" to children's literacy and joins such other notables as Walt Disney, Michael Jordan, Jonas Salk, Steve Jobs and The Beatles.

Before J.K. Rowling's bespectacled boy wizard went off to study at Hogwarts, some parents feared their kids would never enjoy reading. Once Harry Potter and the Sorcerer's Stone hit U.S. bookstores in 1998, followed by five more installments, parents found their kids couldn't get enough of Rowling's fantasy adventure novels, some longer than 600 pages. To date more than 300 million Harry Potter books have sold worldwide; they crowded The New York Times bestseller list for so long that the newspaper created a separate children's list. "The Harry Potter books not only sparked an explosion of interest in reading," says Lisa Von Drasek, the children's librarian at the Bank Street College of Education in New York City, "they inspired kids to go out and discover other great books too."