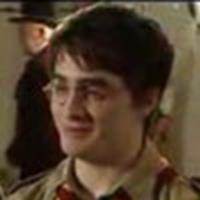 We recently told you

that Daniel Radcliffe from the Harry Potter movies would be featured in an upcoming episode of 'Extras.'

A trailer for the show recently aired on BBC2 in the UK in which Dan, wearing a boy scouts uniform, kisses Ashley Jensen, an actress on the show. No news as to when the episode will air but the series will premiere during

the week of September 9th, with Dan's episode to air shortly thereafter.

You can read a brief description of the scene here

[The scene] consisted of Daniel dressed in a boy scout uniform wearing (HP style) glasses. He says to the leading Actress of the series [Ashley Jensen, who plays Maggie], "This is for you to remember me by." and he steps forward and kisses her. As he moves away from her, she asks "Have you brushed your teeth?", to which Dan replies angrily, "Yes!"

You can view the trailer here

for letting us know that the episode featuring Dan is set to air on Thursday, September 28th on BBC2. Remember, if you get a chance to capture it, please send it our way.