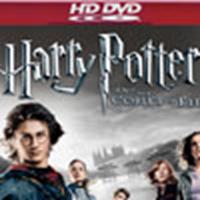 today (and then apparently un-released

) details and cover images of the HD DVD

version of Harry Potter and the Goblet of Fire.

Before mysteriously disappearing, the details on Warner Home Video's retailer info site claimed the discs will be presented in Dolby TrueHD sound and will include an "In-Movie Experience" (IME), as well as all the extra features included in the standard edition, several industry sites reported today.

UPDATE: Warner Home Video has told HPANA that they have not announced a release date yet.

So, what's IME? According to the marketing lingo:

Warner Home Video HD DVD ... provides a new level of interactivity, giving instant access to extra features with the debut of a seamless menu-bar that allows viewers to enjoy features and settings without leaving or interrupting the film.

And what's so special about HD DVD in general? It "provides six-times better resolution than standard DVD," according to the official site. "It's as simple as that. This of course translates to six-times more explosiony-explosions, six-times more impassioned passion and six-times more frenzied shark frenzies. Oh, and six-times the goose bumps."

Warner Home Video confirmed to HPANA last month that it would be putting all of the standard Potter DVDs on hiatus by early 2007.