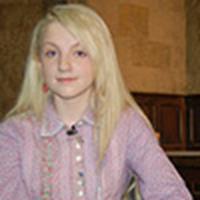 Yesterday we told you that an interview with the newest addition to the Harry Potter movies, Evanna Lynch, would be airing in the UK today.

is now online. In it, Evanna describes the audition process, why fans like her character and if she is excited to film the Ministry of Magic scenes at the end of the film.

Evanna: It's really fun. I just really enjoy the filming part and everyone's really, really nice. And you don't get nervous when you are talking to everyone. Well the first few days I was nervous but then when you start talking to people it's fine.

CBBC Newsround: Are you looking forward to filming the fight scenes in the Ministry of Magic at the end of the film?

Evanna: Yes very much. That's going to be exciting. I was watching them building the set and it looks really good.

UPDATE: You can view the video here

(you must have RealPlayer) or go here

and click on Thursday. You can also view the video in QuickTime here

, thanks Hannah. You can see some high-quality screencaps here