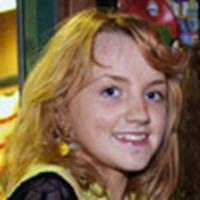 A new interview with Evanna Lynch

on CBBC Newsround (BBC One) tomorrow evening at 5:25 pm (12:25 pm EST). The interview filmed at Leavesden Studios while Evanna was out of costume, discusses how filming has been going and a few other things.

a preview of what will be on the show tomorrow evening:

She's perfect for the part, and we talked about how she got the role. How filming's been going and a few other things.

She even pointed out that when I was filming at the open casting, I interviewed a girl just in front of her but didn't talk to her! Although we have now found a pic of her at the casting just behind me while I'm talking to the camera.

It won't be on BBC America, but we'll have a long version (haven't timed it exactly but it's around 10 mins) up on our site

We did shoot it at the studio, but she wasn't in costume, she was in her own clothes.

and Molly for the quote from Lizo and if you capture the video please send our way.