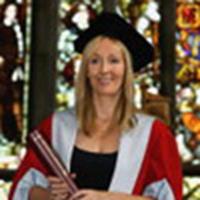 today by Aberdeen University for her work with multiple sclerosis research. Ms. Rowling received a Doctor of Laws from the University and when asked what the degree meant to her, JK said: "I am thrilled... it is very exciting."

JK Rowling is best known because of a book that she wrote in a cafe in Edinburgh which has made her a household name.

Harry Potter And The Philosopher's Stone and the subsequent Harry Potter books have now been read by millions worldwide. However, what is less well known is Ms Rowling's significant contribution to many charitable causes.

She (Rowling) is an example of a Scottish leader who has used her reputation and wealth to support the battle for improving human health and for fighting human disease.

For this and her many contributions to society, I have the honour to recommend JK Rowling to you for the degree.

You can view some pictures of the event here

UPDATE: Thanks to Paul for letting us know that Dissendium has a report from a person who attended the event, which you can read here

. Laura even managed to have a word with Jo and get her autograph.

for letting us know that you can view a video (17.6 MB) of Jo's post-graduation interview. The press release from the event, as well as a new picture of Jo can be seen here