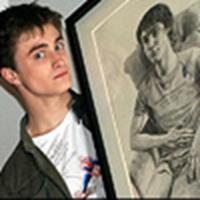 Daniel with his portrait

to his collection of work.

Daniel's portrait, as well as nine others, will be unveiled

Daniel, who was 14 when he posed, had this to say about the experience:

I love it. Until recently, I'd seen a peek of it in the catalogue, but not actually seen the real thing. It was strange seeing myself as I was two years ago, not as I am now. If you look at each individual part of my face they look exactly like part of my face. Together it's surreal. It's a great honour to be in there among such amazing actors and actresses.

will also be showing at the National Portrait Gallery.

The Guardian also has a report here

about the portrait in which the artist discusses working with Dan.