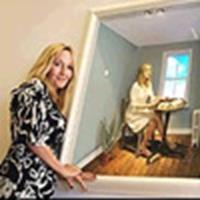 Portrait of Rowling to hang in London gallery

A portrait of Harry Potter author JK Rowling is being unveiled

at the National Portrait Gallery in London today. The artist, Stuart Pearson Wright said that he admires Rowling because she is a “woman who can successfully combine motherhood and a creative career.”

I was drawn to Jo principally because of my admiration for a woman who can successfully combine motherhood and a creative career.

Jo told me that she had been drawn to my work because of the tiny paintings that I had done of a family of people with red hair.

She confessed to sharing a fascination for people with red hair, which any readers familiar with the Weasley family in the Harry Potter books should not be surprised about.

You can see a larger view of the portrait here

and read JK's opinion of the portrait here