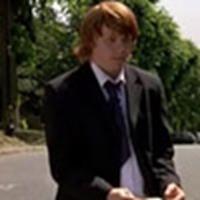 would be screened at this year's Tribeca Film Festival in New York, which runs from April 5th through May 7th. You can now see a snippet

from the film on the festival's web site.

The synopsis of the film reads:

Ben (Rupert Grint) is a shy teenager living in London and trying to escape from the clutches of his religious mother (Laura Linney). He finally gets his chance when he meets a retired actress who whisks him off to Edinburgh, where he learns to drive, dance, and pick up girls. Brock's loosely autobiographical coming-of-age tale is a heartwarming treat.

The movie will be showing on April 30th, May 1st and May 6th, with tickets costing $12 each. Please go here

to book your tickets or to read additional information about the festival.

for the link via Regan.