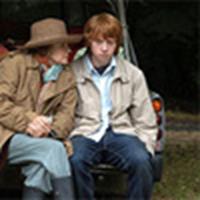 will be one of the many movies showed at this year’s Tribeca Film Festival in New York. The festival runs from April 5th through May 7th and will showcase over 250 movies from around the world.

The synopsis of the film reads:

Ben (Rupert Grint) is a shy teenager living in London and trying to escape from the clutches of his religious mother (Laura Linney). He finally gets his chance when he meets a retired actress who whisks him off to Edinburgh, where he learns to drive, dance, and pick up girls. Brock's loosely autobiographical coming-of-age tale is a heartwarming treat.

The movie will be showing on April 30th, May 1st and May 6th, with tickets costing $12 each. Please go here

to book your tickets or to read additional information about the festival.

Thanks to Natalie for the news.

Also, thanks to Michelle for letting us know that Alan Rickman's film Snowcake

will also be shown at the festival on May 4th and 7th.