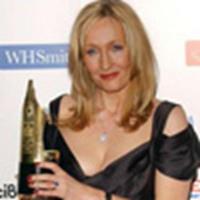 , which was held in London this evening.

Ms. Rowling was in attendance and said:

I'm delighted that Harry Potter continues to give so much pleasure to adults and children, and I'm honoured to receive this award. I am enjoying writing the last book in the series and it's coming along nicely.

Half-Blood Prince was up against Jamie Oliver's Jamie's Italy, Sharon Osbourne's My Autobiography and Jeremy Clarkson's The World According to Clarkson.

You can see some pictures here