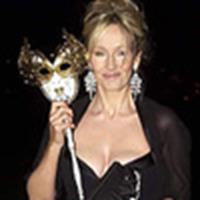 The ball included an auction with a diamond necklace donated by the author, a chance to become a hero or villain in Ian Rankin's next Rebus novel and a treasure hunt, with the clues written by Rowling. Among the many guests to attend was actor Robbie Coltrane.

You can view 3 pictures of the event here

courtesy of WireImage and thanks to everyone who wrote in about the event.