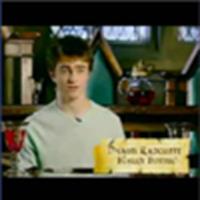 that Warner Bros. had released an official podcast on the Harry Potter and the Goblet of Fire DVD on iTunes. They have now added part 2 of their three-part interview with the stars of the movie.

This part of the interview consists of the trio discussing who is really like their characters in the movies and would seem to be included in the DVD.

Thanks to everyone who let me know about the update and part 3 will be released on March 10th.