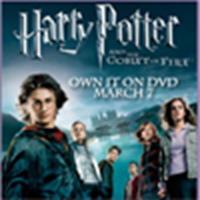 Warner Bros. has released an official podcast on the Harry Potter and the Goblet of Fire DVD on iTunes. The podcast consists of part 1 of an audio interview with Daniel, Rupert and Emma (4:33). Each discuss their thoughts on the film and there is also a promotional clip from the DVD which we have seen previously

of Dan preparing for falling down the tower during the first task.

You can click here for the direct link to the podcast.

Additional podcasts with the cast will be released on March 3rd and 10th.

Thanks to Marco for the tip.