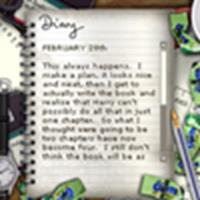 JK Rowling has updated her diary on her site

with some tidbits on the next Harry Potter book. While she has been busy she does comment that she thinks the next book won't be as long as Order of the Phoenix - that is if she can stick to the plan.

This always happens. I make a plan, it looks nice and neat, then I get to actually write the book and realize that Harry can't possible do all that in just one chapter. So what I thought were going to be two chapters have now become four. I still don't think the book will be as long as Phoenix, but if that keeps happening… no, it won't. I'm looking at the plan, and it can't. Surely. Please.

Ms. Rowling has also updated her Rubbish Bin section with discussion about a purely garbage article

from the British press.