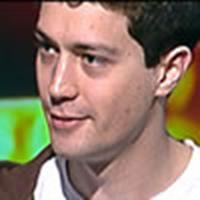 Interview with Christian Coulson on 'CoS,' 'HBP'

from the Chamber of Secrets movie recently gave an interview with BBC Norfolk. The actor who portrayed Tom Riddle on the screen fondly reminisces about his experiences auditioning and filming for the 2nd Harry Potter movie. Here are some excerpts from the interview

"I hadn't read the books until I auditioned. The auditions took six months. They saw about a thousand people, but in the end they got down to three and then they camera tested me and that was it. By the time the call came it had been going on for so long it was a relief."

When Christian got that all important phone call to say he'd landed the part, it was all very exciting. "The first film wasn't out, but obviously it was starting to build as an idea. Of course it was exciting, the part really chimed with me when I read the book and I felt very strongly there were some things I could bring to it".

"I'd love to do it again," said Christian.

"When a friend rang to tell me to read the sixth book because [Tom Riddle] was in it again it was exciting - but who knows," he added.

Make sure to visit BBC Norfolk

in order to read the full article or watch the (RealPlayer video file) interview with Christian.

Thanks to Martin for the heads up!