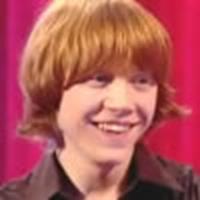 As previously reported, Rupert Grint (who is Ronald Weasley in the Harry Potter movies) would be appearing on the BBC One

New Year special, Generation Fame, a celebrity game show hosted by Graham Norton. The show has recently aired and with his grandfather, Chris, Rupert showed off his dancing/skipping (double dutch) skills and attempted to create a teapot to win a celebrity competition:

Thanks to Lee and Siobhan for the tip!