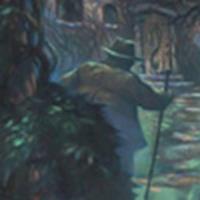 the entire slipcase cover artwork for the U.S. Deluxe Edition of Harry Potter and the Half-Blood Prince.

We are excited to release more artwork than ever before for this spectacular deluxe edition, where layers of suspense unfold as Harry and Dumbledore peer through wild branches, while a mysterious man creeps toward an unidentified home. Once again, Mary GrandPré's mystifying artwork beautifully features scenes that entice readers with clues from the soon-to-be released, Harry Potter and the Half-Blood Prince.

You can view the art here