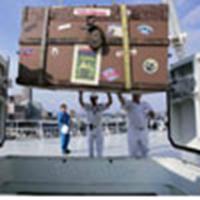 The first author-signed U.S. edition of Harry Potter and the Half-Blood Prince has arrived in New York City under tight security after a transatlantic crossing on Cunards Queen Mary 2. The signed copy will be presentated to the Grand Prize Winner of Scholastic’s Public Library Sweepstakes at a press event on Friday, July 15 at 9:30a.m. at Scholastic headquarters in New York City, in which the street outside the store will be turned into Harry Potter Place to celebrate the release.

After J.K. Rowling signed the book in her office in Edinburgh, Scotland, a Scholastic executive traveled with the book—under tight security—to Southampton, England where it was placed in a 5 foot by 7 foot steamer trunk which was then locked and loaded by crane onto the Queen Mary 2 for its journey to America. When the ship docked in New York City harbor, the steamer trunk was unloaded and transferred by the ship’s porters to a Dunbar Armored truck and taken to a secure and undisclosed location. It will remain there until Friday, July 15 at 9:30am when Dunbar will deliver the trunk to Scholastic headquarters for a press event. There the trunk will be unlocked and the book will be presented to the grand prize winner of Scholastic’s nationwide public library sweepstakes. More than 9,000 public libraries nationwide entered the sweepstakes for a chance to win the book.

You can view some pictures here

UPDATE: You can view the video of the trip here