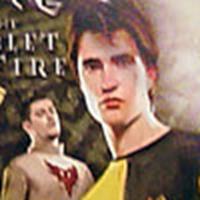 Picture of 'Goblet of Fire' champions at NY toy fair

At last month's American International Toy Fair in New York, Warner Bros. and its merchandise licensees pulled out all the stops to promote November's release of Harry Potter and the Goblet of Fire in theaters.