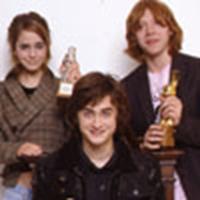 was given exclusive images directly from German magazine Bravo of Daniel, Rupert and Emma receiving their Bravo Otto awards just prior to the Harry Potter and the Prisoner of Azkaban DVD launch party in the Savoy Hotel in London on Thursday, Nov. 18.

While Page will be posting them later this evening along with some images of a special look inside the Prisoner of Azkaban DVD launch party courtesy of Bravo, she has kindly forwarded us a 'preview' of the trio and their awards.

has scans of the magazine article.