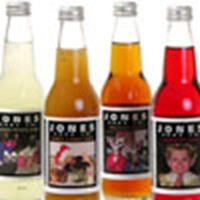 With Thanksgiving just around the cover, Jones Soda Co.

has introduced a set of strangely flavored drinks thanks to the unexpected success last year of the company's Turkey & Gravy Soda.

Familiar to Harry Potter fans who consumed loads of dirt, vomit, booger and salmon flavored jelly beans due to the popularization of fictitious-turned-real Bertie Bott's Every Flavor Beans, the concept is based on our natural fascination with new and bizarre things, say experts.

were fetching bids over $60 on eBay after stores sold out.

This year Jones plans to produce up to 15,000 five-packs of the 12-ounce bottles, which come complete with utensils (a straw and a toothpick). The sodas may not be as satisfying as a real holiday meal, but they can boast being both calorie- and carb-free, not to mention vegan and kosher.

Beginning Thursday, they'll be on sale at some Target Corp.

stores throughout the country, and at other retailers, for between $14.95 and $16.95, with proceeds benefiting Toys for Tots