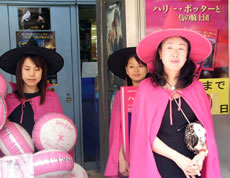 To coincide with the Sept. 1 release

of the Japanese version of Harry Potter and the Order of the Phoenix, author JK Rowling's official site

now also has a Japanese edition.

Phoenix flew into bookstores in Japan with a record first printing of 2.9 million, outpacing the previous novel, Harry Potter and the Goblet of Fire by almost 600,000. JapanToday.com reported that it generally takes the official translator about a year to convert from the English edition.

Some bookstores opened at 5 a.m. and Yuko Matsuoka, the translator (pictured at right), spent the day handing out copies at various metropolitan stores.

In related news, Macromedia (which makes the technology used in Rowling's site) has named JKRowling.com today's Site of the Day

. It was designed by Lightmaker Group

is the company's ninth time on the list for one of its sites:

Lightmaker worked very closely with J.K. Rowling to give an accurate portrayal of her world. The user has to hunt for content in many areas of the website, as well as discover hidden and secret info where they can.

for the tips and Rachel for the photo.