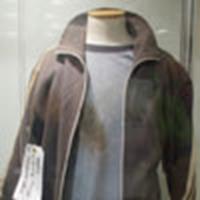 Harry, Hermione and Ron get up to quite a few shenanigans in Harry Potter and the Prisoner of Azkaban and at the Galeries Lafayette

exhibition in Paris, you can see the proof in the sullied clothes they wore during the latter half of the film.

Veritaserum has some photos, sent in by fans:

Ron (Rupert Grint), of course, gets bitten and dragged across the ground, while Harry (Daniel Radcliffe) and Hermione (Emma Watson) are whomped by a certain willow tree near the Shrieking Shack. Hence the decidedly disheleved apparel on display.

Update: DanRadcliffe.com has some higher-quality photos