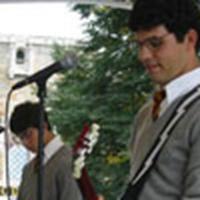 Harry and the Potters

(ISPOL) recently attended a free Harry and the Potters

concert in Kansas and were nice enough to share some pictures and insight into the event:

Despite the stifling heat, the Dusty Bookshelf was packed with Potter fans. Messrs. Potter provided an array of emotions through their music ranging from angst-ridden teenage rants, politicial activism (proclaiming Cornelius Fudge to be an ass, freeing house elves, saving Ginny) and Weasley-esque prankishness.

At one point, Harry 4th year and Harry 7th year nearly brought the audience to tears with their collective lament for their godfather. Harry and the Potters proved to Lawrence, KS

and soon the world that indeed, Voldemort can't stop the rock.

The duo, currently on tour, is comprised of brothers Paul and Joe DeGeorge, who formed Potters in 2002. If you've never heard of these guys, check out their official site (link above) or this review

of their debut album.