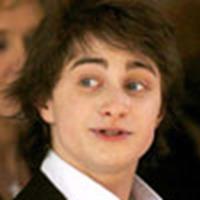 The young teen who plays Harry Potter -- known to most fans as Daniel Radcliffe -- turned 15 today.

and separately put together some fantastic surprises for the birthday boy:

- Fans sent in over 40 pounds of punk and rock music memorabilia, including CDs, DVDs, concert posters and t-shirts. (Radcliffe is a big fan of the genres.)

- Webmistress Jenna has been hard at work since December creating a new, semi-annual magazine (not an e-zine, or a newsletter but an actual printed publication) for teens and young adults. The focus is on music, lifestyles and trends that both girls and guys can read together and relate to. (P.S. The online version of the magazine features Emerson and Jamie

The character Harry Potter will turn a year older with author J.K. Rowling on their shared birthday later this month (July 31).