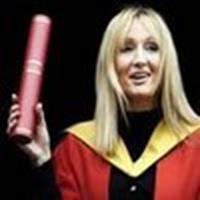 The Harry Potter novelist, who lived in the Scotland capital city while writing the first book in the series, picked up a similar honor

in 2000 from Edinburgh's Napier University.

"I am delighted and honoured to be receiving an honorary degree from the University of Edinburgh, my adopted home city," said Rowling in February.

Update: You can view pictures of Rowling accepting her degree at Getty Images