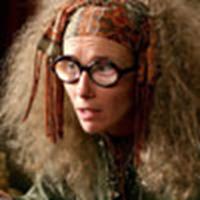 Dispelling the myths of 'Azkaban'

Once and future HPANA reporter Dayna Rozental has written up a pseudo-review of Harry Potter and the Prisoner of Azkaban that aims to quell rumors and gripes fans have brought up about the movie. She was at the world premiere on Sunday and washes away worries about Quidditch, the new director, and more.

Warning: This review contains big spoilers. Scroll to the bottom for links to other fan site reviews.

There's a saying that goes "the third time's the charm," and in this case, it's the literal truth. Harry Potter and the Prisoner of Azkaban has all the charms, enchantments, spells and sorcery one would expect from a film based on one of JK Rowling's award-winning novels, with the added bonus of being a good film that people who have not read the books or seen the previous two movies will also enjoy. The new film is a dark, fast-paced, action-packed story of a child becoming a teenager and the fact that he and his friends happen to carry around wands is almost secondary.

Prisoner began getting flack from fans and non-fans alike almost immediately after work on the second film, Harry Potter and the Chamber of Secrets, was completed. Rumors and gossip about why the new movie was going to be the worst thing to ever happen to the Harry Potter series flooded the Internet. Now I would like to set the record straight.

Rumor: Director Alfonso Cuaron should not be directing a children's movie. It simply is not appropriate.
Reality: My first response to this is that the film is not a children's movie. Aside from that, Cuarón is quite possibly the best thing that has happened to the series since JK Rowling put pen to paper back in that Edinburgh café.

The cinematography in Prisoner is amazing. Cuarón uses angles that have never before been seen in a Potter film. The extreme close-ups of happy, beaming children and slow pans of the landscape with overly emotional scoring are gone. Additionally, the new director brought performances I never would have thought possible out of the younger actors. This is partly because the actors are growing up and are more at ease in front of the camera, but it's Cuarón's guidance that has turned some of them from children reading lines into actors. Dialogue was delivered so perfectly that I found myself laughing out loud at scenes that had almost become stale to me after reading the book so many times. 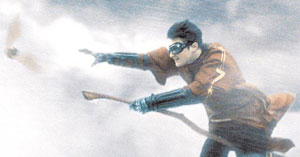 Yes, Virginia, there is a Quidditch scene

Rumor: Because Sean Biggerstaff (Oliver Wood in Philosopher's Stone and Chamber of Secrets) did not return, there's no Quidditch scene/the Quidditch scene will be bad.
Reality: There was Quidditch in this movie, and it was Quidditch like we've never seen it before. Harry spends most of the game up in the clouds. The storm is so fierce one of his teammates' brooms gets struck by lightning and catches fire, and on top of it all the dreaded Dementors show up. When we see Harry in the infirmary after the game, he isn't the only person there in Quidditch robes. The match is so fast-paced and brutal I was on the edge of my seat, despite the fact that I already knew exactly what was going to happen.

Rumor: The Knight Bus crashes into a car outside The Leaky Cauldron and Tom the innkeeper (Jim Tavaré) has to repair it magically before bringing Harry (Daniel Radcliffe) inside. The Knight Bus's magic is supposed to keep it from getting into accidents.
Reality: The Knight Bus scene is amazing. I thought it looked terribly cheesy in the previews, but it had me in stitches. There is a great effect where the bus slows down and becomes very narrow to squeeze between two double-decker buses, then instantly goes back to rocketing around like we see in the trailers. When the bus stops in front of The Leaky Cauldron, it does hit a Muggle car, but it's just a light tap that causes the alarm to go off. Tom nonchalantly turns off the alarm -- looking just like any Muggle annoyed by a car alarm would -- which got quite a few giggles from the audience. The scene was scored by my favorite part of any Harry Potter soundtrack to date, which is always a bonus. 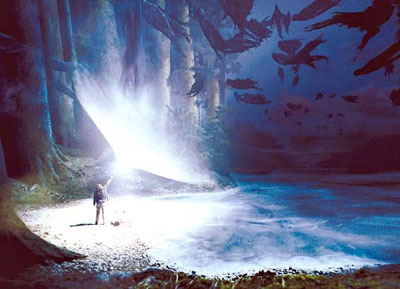 Rumor: The film ends with Harry flying off into the sunset, in heart-felt, melodramatic fashion, with all the other students cheering him on.
Reality: The movie ends with Harry flying and a cheering crowd, but it isn't dramatic. He just received a new broom and is trying it out for the very first time, so he has a bit of trouble controlling it, zooms around a bit, heads directly toward the camera and fin. While it doesn't correspond exactly with what happened in the book, it's far better than the sweet endings we've had to date.

Rumor: Hermione and Ron take their relationship to the "next level" in this installment.
Reality: While there is certainly a bit of awkwardness between Ron Weasley (Rupert Grint) and Hermione Granger (Emma Watson), nothing happens to indicate that they are more than friends. We see that Ron often notes Hermione's whereabouts, and they argue like an old married couple, but that's as far as it goes.

Rumor: Harry's Patronus takes the shape of a shield.
Reality: Harry's first attempts at the Patronus can be interpreted as looking somewhat like a shield, but his corporeal Patronus (he only conjures it once) is quite clearly a stag. It's quite beautiful, though it does not seem to run around knocking the dementors about, rather it exudes a sort of force that does the job for it. (It also seems to have an interesting effect on Sirius, but I won't spoil that for you.)

Rumor: The scenes with Professor Lupin (David Thewlis) and Harry talking take place in the Astronomy tower (where they have no good reason to be, of course).
Reality: Harry and the professor have their heart-to-heart on a bridge. This is a minor detail, of course, but it seemed to bother a lot of people.

Overall, Prisoner of Azkaban is a good film. It is a movie that everyone can enjoy and fans of JK Rowling's books can be proud to wear the Harry Potter name, not just because of how true it is to the original story, but because it's finally a smooth-paced, beautifully shot movie we can call our own.

More from around the Web:

Reviews from all over, courtesy Rotten Tomatoes

(thanks to merri_maven for the link)
Ain't It Cool News