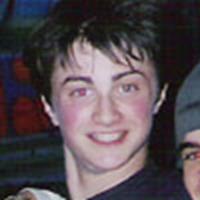 Harry Potter and the Doubles of Azkaban

How do Daniel Radcliffe and the doubles for Harry, Ron, Hermione cut loose? By going bowling, of course!

That's just what happened during the filming of Harry Potter and the Prisoner of Azkaban, according to the insider who sent us this great hi-res photo:

According to the tipster, Harry's double is Tolga Kenan, Ron's is Rickie Hubbucks and Hermione's is Flick Walker. The others in the picture are not identified. It was apparently shot at Fort Willam Scotland when the cast and crew were bowling on a day off.

Note to whomever sent this in: Please contact me using a non-AOL e-mail address as I am unable to reply!