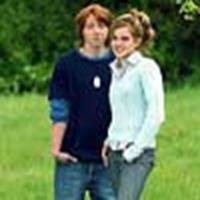 Rupert and Emma move to the forefront in 'Potter' movie

The Los Angeles Times has an interesting interview

with Rupert Grint and Emma Watson in which they discuss working on the Harry Potter movies with Alfonso Cuarón, their stunt work, as well as the relationship of their characters in the movie, there is also a new picture to enjoy.

"The third book is definitely my favorite, and it's a good script for Hermione," she says. "She has some great scenes." There's a split second in the trailer for the new film when Watson as Hermione apparently punches someone, then says: "That felt good!" And did it? "You're very right about that," she giggles. "Yes, I loved it. My first screen punch! It was fantastic!"

It's been building up for ages through the first three films," Watson says, flailing her arms wildly. "He's been insulting, rude and really hateful. Harry's going, 'Ignore him, don't say anything,' and suddenly Hermione gets so angry she ends up punching the guts out of him. It's fantastic! Very girl power!"

Rupert has this to say about the relationship between Ron and Hermione:

"There's a story line developing between Ron and Hermione," he reflects. It's like a little thing going on between them, and there's a lot of awkward moments in this third one. A few hugs. And we fall out a lot as well. Alfonso thought that was a replacement for our relationship."

What he enjoys most is being involved in stunt work. In one scene, Ron is pulled along the ground and through a hole in a tree. "That was fun," he says with a smile. "I did swallow a lot of grass, though."

Thanks to Jenna at DanRadcliffe.com

for the story and new picture, you can read the whole interview HERE

Update: Thanks to Allo for sending us a scan of the picture which you can view here