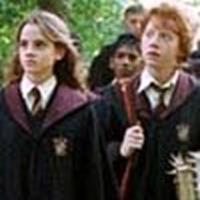 Even more 'Prisoner of Azkaban' images

has posted 24 new photos from Harry Potter and the Prisoner of Azkaban, along with larger versions of previously seen pictures, which you can view at their PoA Gallery

Some of the new images feature Hagrid's Care of Magical Creatures class, Trelawney examining Hermione's palm, as well as a group shot of Hermione, Ron, Fred, George, Percy, Neville, Seamus, (and possibly Ginny), along with several other students, looking up in amusement at something...

Note: HPANA is mirroring these since MuggleThai is no longer available, presumably due to traffic. Thanks to MuggleNet

for tracking down the pictures after they went offline!

Note II: In related news, DanRadcliffe.com has also posted a nice scan of the back cover of TV Guide featuring an ad for the May 9 airing of Harry Potter and the Sorceror's Stone.