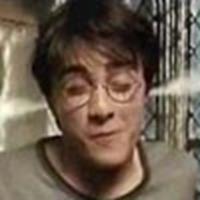 Thanks to a reliable source who will remain anonymous, we have a transcript of the new trailer for Harry Potter and the Prisoner of Azkaban we previously reported on. It's been officially confirmed first-hand that it clocks in at 1 minute 54 seconds and that it's "awesome".

Cuts to Hermione and Harry sitting at a desk looking worried

Cuts to Draco smirking (what he does best, of course!)

Cuts to Sirius in Azkaban and you hear Mr. Weasley telling Harry about him (someone else says "he's a murderer")

Cuts to Ron and Hermione (with many other students in the background, including Draco – this picture has been on the net for awhile) – Hermione grabs Ron’s hand, Ron pulls away and looks at her like she’s crazy

Cuts to Harry looking at a NEW picture of his parents

The cloudy graphics come back with "this summer"

Cuts to a flying Buckbeak

Cloudy image again with "Something wicked this way comes" text

Cuts to Sirius standing in the Shrieking Shack

Cuts to Harry standing in the doorway and you hear him saying "I hope he finds me – when he does, I'm going to be ready"

Then is a bunch of images one after the other including:

Cuts to Malfoy out in the snow saying "filthy little mudblood"

Cuts to Hermione storming down from Hagrid's hut right at Malfoy, saying her oh so famous line "You evil, you..." and leaving a shocked and very amused Harry and Ron behind

Then she punches the CRAP out of Malfoy

She turns away and says "that felt good"

The cloudy image reappears with the PoA logo

The trailer will be released with Scooby-Doo 2 on March 26.