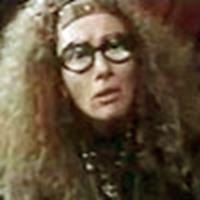 Images from the new 'PoA' trailer

Speak of the devil - just as we're reporting on the new trailer for Harry Potter and the Prisoner of Azkaban, DigiCasey has some screen captures from an apparently leaked copy

. Included is a shot of Professor Trelawney, Harry and Hermione in the hospital wing, Hermione smacking Draco Malfoy, a couple of shots of Dementors, and a spell coming out of someone's wand (before fading into the WB logo).

, which has worked on trailers for the Harry Potter and Lord of the Rings series.

Additionally, The Leaky Cauldron is reporting

We've just received a description of what may be part of a new POA commercial. A Leaky reader took part in a test market panel and sent us these details of new scenes. They include ones of Harry flying on Buckbeak, the patronus lessons, and notably Hermione punching Malfoy, then saying "that felt good".

Update: Warner Bros. has asked DigiCasey to remove the photos from their site for now, but TheSnitch.co.uk has a ZIP file containing all of the images