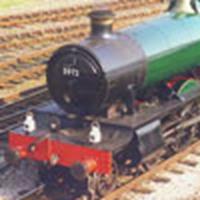 Reminder: You can win a trip for two

tour to Britain will ride on what Harry Potter fans worldwide recognize as the Hogwarts Express train from the films based on author JK Rowling's popular books.

The announcement was made after Beyond Boundaries Travel

, the train's owner. The locomotive #5972 doubles as the celluloid version of the Hogwarts Express and is being put into service expressly at the request of HP Fan Trips while on exhibit in York for the National Railway Museum's Rail 200

extravaganza, celebrating 200 years of railways. Trip-goers will have private carriages just like the ones used in the films, with access to a candy trolly and other goodies during the ride.

"We're extremely excited to be able to offer this to the Harry Potter fans who will be coming on the first of what we hope is many HP Fan Trips operated by Beyond Boundaries Travel," said Jeff Guillaume, one of the group's organizers. "Only the people on this trip will be able to say they've ridden on the actual Hogwarts Express train seen in the Harry Potter movies."

An immersive week-long excursion through the United Kingdom, centered around the film debut of Harry Potter and the Prisoner of Azkaban, awaits participants who have until March 31, 2004 to book their reservations. Actor Chris Rankin

, who portrays Hogwarts School of Witchcraft and Wizardry's head boy Percy Weasley in the movie, will accompany travelers for an entire weekend as they trek through London, feast at a Great Hall-style gathering, and watch a "Quidditch" match created exclusively for the tour by USA Team Handball

, a member of the United States Olympic Committee.

(This is the first of three special announcements that will be made through the end of March. The tour, which celebrates the history of wizards, fantasy, and magical creatures using world-class storytellers and ingenious activities, is developed in cooperation with Visit Britain

, the official British Tourist Authority, and commences on June 1, 2004.)

About Beyond Boundaries Travel

Since 1991, Beyond Boundaries Travel has designed theme-based experiential tours for group travel. It is an international tour company working with The History Channel, the World Bank, the United Nations, the National Institutes of Health and numerous other clubs and organizations. Beyond Boundaries works with actors, authors, film directors, dancers and choreographers and many other very special guest presenters on these customized programs.