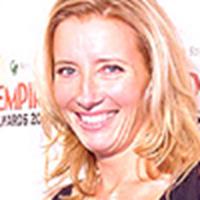 talked a bit about her role as Professor Sybill Trelawney in the upcoming Harry Potter and Prisoner of Azkaban which comes out on June 4, 2004.

"She was so much fun to play. I decided that, since she was someone who saw into the future, she had to be someone who couldn't see anything at all in the present. Like where she was going, her clothing, anything. I decided to dress her slightly differently, and had wonderful co-operation from my director and designer and everything."

Thompson also scotched the rumours connecting her to Lemony Snicket's A Series of Unfortunate Events. But she will be appearing in Nanny McPhee, her self-penned adaptation of the Nurse Matilda series by Christina Brand.