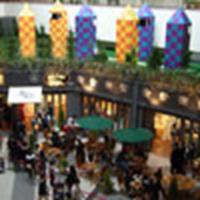 Akichoro of Charmed By Dan

got an extremely special treat last weekend. A Japanese shop that offers official Harry Potter merchandise and memorablilia had its grand opening, and she shot some wonderful pictures of the event

, including a couple of props from Harry Potter and the Prisoner of Azkaban.

The store, Harry Potter Collections, is located in a mall

In addition to Harry's Firebolt (which the shop assured Akichoro was one of the real props used in the film), you can see Professor Trelawney's crystal ball and a Defense Against the Dark Arts schoolbook!

Check out the report and pictures

right now! Thanks ever so much to Hirame for the tip and English version of the report.