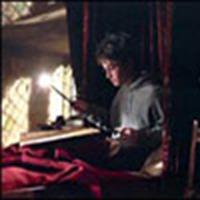 In yet another interview

, dicusses the differences in Harry Potter and the Prisoner of Azkaban from the other movies. There also is a new picture with the article.

He comments on the differences as well as admitting that he's ready to do a two-guys-talking movie next.

"It's just different minds, with different virtues and different flaws," Cuarón says graciously by phone from an editing room in London. "What I inherited was very well-crafted by Chris and the creative team, and let's not forget that most of the casting was done by Chris in his first two movies. I felt very comfortable in that world, and I hope I can add to that world and not just make a repetition of the first two."

"I was very lucky, particularly with the young actors," he notes. "I got them al dente, at the perfect boiling point. On the one hand, they'd done two films and they understood all the technical aspects and lingo of doing a film. On the other hand, they were 13, and they were taking themselves really seriously. So they were willing to explore more emotional territories. Probably, if something's going to be different about Harry Potter 3, it'll be more emotionally grounded, and that will be reflected in the style of performance."

Thanks to Ami & Cassi for the tip.