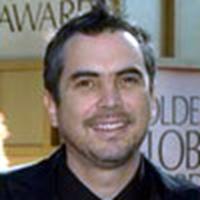 has a short interview with Harry Potter and the Prisoner of Azkaban director Alfonso Cuarón in their latest issue. He talks about author JK Rowling's influence on the film, real-life parallels with Potter characters and more:

We knew we'd be getting a different kind of Harry Potter when Warner Bros. hired Alfonso Cuarón -- the stylish Mexican auteur behind 2002's lauded carnal carnival Y Tu Mamá También -- to succeed Chris Columbus and direct Harry Potter and the Prisoner of Azkaban. But an allegory for our Patriot Act age? That's a surprise.

Why HP3?
The moment I read the book, I was hooked. It's a myth for our times. You read about Fudge and the Ministry of Magic -- that's Tony Blair! And Guantánamo is not that different from Azkaban. There are Dementors over there, too. [Smiles impishly]

You've made some cosmetic changes to J.K. Rowling's world. Is she cool with your renovations?
Really cool. She actually encouraged me: "Please don't be literal." At the same time, we wrote a scene where there was this organ, and tiny people were jumping on the keyboards. She said, "Nope, no tiny people at Hogwarts."

While you were shooting, Rowling's fifth book was released. What was the reaction on the set?
There are what I call "the Harry Potter Talibans" here -- they read it in one weekend. I promised I was not going to read it, because I'm a little over-Harry Potterized. The day the book came out, I saw it and said f--- it, I'm just going to see how it opens. Next thing you know, I've read it all.

So you're having fun?
Loads. Though after so many bluescreens, you just snooze. The other day, I joked, "Give me a sex scene! Somebody, please: Get naked!"

See the entire 2004 movie preview in the magazine if you're a subscriber or AOL member (keyword: Entertainment Weekly).

Thanks very much to Ev for the transcript.

While we're on the subject of interviews with Alfonso, here's one we overlooked at the time: Empire Online's article Inhereting Hogwarts

. They sat down with Cuarón around the DVD release of his hit Spanish movie, Y Tu Mamá También, in October 2002:

Do you think you can do both - create both art and do business in Hollywood?
Well, yes, there are some amazing examples. Every year I think some of the best movies come out of the Hollywood structure. I'm talking about people like the Coen brothers, Woody Allen and Scorsese.

Are you enjoying relocating to Britain for the shooting of Harry Potter and the Prisoner of Azkaban?
I've always liked London and spent long periods here but never quite as long as this. I'm just having a blast working on this film and collaborating with everyone and walking around London everyday.

Thanks to Wizard News