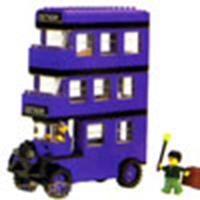 announced its worst-ever loss in the organization's 72-year history after an "unexpectedly bad, nearly catastrophic" 2003

The company, which based its empire on plastic building bricks, had worked hard since it made a $180m loss in 2000 to turn round the business, and achieved successful sales of Harry Potter and Star Wars products last year (2002). The Hogwarts Castle, a top-of-the-range item in the Harry Potter series, sold almost a million items.

Update: Lego has fired Plougmann and another top executive, according to the Associated Press, and expects to announce plans to reduce their 8,000-strong workforce in the near future.

In related news, ToyWiz.com is taking pre-orders for the new Lego sets for Harry Potter and the Prisoner of Azkaban

The sets will start shipping in May, and are available for pre-order now. Thanks to The Leaky Cauldron