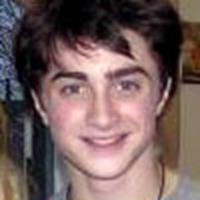 had the unique opportunity to interview the star of the Harry Potter movies, Daniel Radcliffe

while on a recent visit to the U.K. She visited Leavesden Studios, where much of the movies are filmed, including Hogsmeade and the Great Hall. Check out this picture

of Jenna with Daniel.

Here is an except from her report:

On visiting Leavesden Studies: My most memorable day from the entire trip was the day I visited Leavesden Studios. I was greeted by a studio representative, and taken on a tour of the Harry Potter and the Prisoner of Azkaban set. Parts of the set were being dismantled now that filming is complete, but it was still amazing to see the Great Hall, the hallway with the moving staircases, Professor Trelawney's classroom, Hogsmeade and some of the areas where the special effects are filmed. Harry Potter productions truly are magic.

Some questions that Jenna asked of Daniel:

Jenna: What it was like to work with Gary Oldman?

Dan: Gary is a really cool guy, and really fun. He is really focused and it is very interesting to watch him prepare for a scene.

Jenna: What scenes should we look for in POA, and which scene are you the most proud of?

Dan: Definitely look out for the scenes with the hippogriff, and the Quidditch scenes in the rain, but my favourite scene, without actually having seen the film yet, would be the Shrieking Shack scenes at the end of the movie I think.