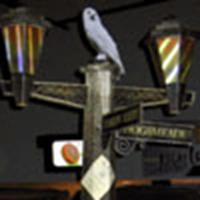 member and friend Dayna took some nice pictures of the sign post display for Harry Potter and the Prisoner of Azkaban at her local theater, which can be seen here:

Dayna also chronicled her quest to find one of her own to take home:

Then he asked which movie I wanted and I told him, and he said "That poster hasn't come out yet anyway, all we have is..." and he pointed to the hologram lamppost display thing that I completely missed on my way in and while standing around waiting for him.

So, naturally I asked about that... does it have to be sent back too? And he said those are DESTROYED when they're done with them! I asked if there was any way I could buy it and he said they aren't allowed to give them away and most of the time they show up on eBay and it's not worth risking your job over.