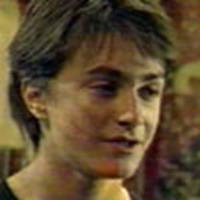 there was a surprise set report from Harry Potter and the Prisoner of Azkaban. Thanks to some quick-typing HPANA readers, we have a few quotes and a description of the segment. Video Update: Screencaps

, and MuggleNet has a RealMedia video originally from DanRadcliffe.com

. (To play the video, we recommend Real Alternative

Are you ready to rekindle the magic?

Daniel: I never actually think of the fact that, yeah, millions of people have seen me grown up from the movies.

[All three Potter stars are full-fledged teenagers and you can see and hear the difference. (Pics of the three from SS NY Premiere, then pics from PoA, all smiling.)]

Rupert: (With a freaking adorable smile) My voice hadn't broken then, and now, it's pretty low.

Hospital wing scene from PoA, showing Ron on the bed:

Ron: It was Scabbers who did it.
Dumbledore: Scabbers?
Ron: My rat, Sir.

Daniel: Who's grown the most? Rupert, without a shadow of a doubt.

Rupert: Yes, it's weird, it's really weird, and I don't feel that I've really changed, but when I look back at the other films, I was tiny.

Michael Gambon: I started using an Irish accent, so the director said, "What was that you were doing?" And I don't suppose Richard was Irish.

Thanks to reader Din (Sidekicks

) and The Potter Profile

for the tips and quotes!